Call of Duty: Ghosts Listed by Supermarket – Release Details and Cover Art Inside!

Call of Duty, the indisputable behemoth of entertainment, Activision’s home run and the sole reason that many people even own a gaming system is, of course, going to have a new instalment released this year. But then, we all knew that. What we didn’t know, but now do thanks to sprawling, world-domineering supermarket chain Tesco, is that it’s going to be called Call of Duty: Ghosts.

Yes with a preliminary cover, pictured below and even a few scarce details of storyline and features, it seems that this year’s new COD has been ousted already, listed publically by Tesco’s online entertainment arm! Always keen to get an early look at the title’s latest efforts; we’ve delved into the listing to see exactly what information we can carefully extract from its tender outermost folds. Spoiler; it’s delicious.

It looks like Infinity Ward will be heading up development on this year’s iteration, as per their year-on-year-off deal with Black Ops developers Treyarch. Reportedly, the game is due to launch on Tuesday 5th November, a date that slots right in tow with previous releases.

It also looks like the game will be set in the near future, however a twist in the background plot will mean only current weaponry will be available to our heroes. Similarly it looks like the basic movement features are being revamped, adding in a slide-while-shooting mechanic, as well as employing a base-level cover system, allowing you to peek around corners. It’s suggested that from a prone position, you’ll be able to roll about to keep yourself concealed.

With the Spec Ops mode, darling of the Modern Warfare series, due to be replaced, we’re almost certain to see something of a familiar flavour packaged in to feed our insatiable co-op hunger. Meanwhile Infinity Ward have been peaking at Dice’s notes it seems as Ghosts will take a leaf from the Battlefield book and include more destructible and interactive environments.

It seems unlikely this leak would be a falsehood, as Activision have already stated they expect to announce the new Call of Duty no later than E3, the industry’s biggest event which kicks off in June. Stay tuned to Hitari for more as we get it! 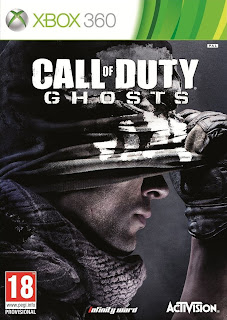